​​Mezzosoprano Charis Peden made her professional debut in 2010, while still a student, as Marcellina in Le Nozze di Figaro with Rogue Opera, Oregon.  Following her studies at Indiana University's Jacobs School of Music, Ms. Peden relocated to Texas and became a staple of the Dallas/Fort Worth music scene. During those few years, she performed roles with Opera Piccola of San Antonio, now Alamo City Opera (Sorceress, Dido and Aeneas), Opera Lousiane in Baton Rouge (Witch, Hansel and Gretel; Third Lady, The Magic Flute), and Opera in Concert (Clarina, La Cambiale di Matrimonio). She also performed frequently with the Dallas Bach Society, Dallas Opera, and Fort Worth Opera, where she can be heard as a Nun/Ensemble on the 2014 Albany Records recording of Crozier's With Blood, With Ink.

​A committed teacher, Ms. Peden has always split her time between performing and her students. In 2010, Peden and collaborative pianist, Kimberly Carballo, held a week long residency at Universidad del Norte, Barranquilla, Colombia, culminating in a guest recital.  In 2013, she held a master class series in Valladolid, Spain with voice teacher, Antonio Santos Garcia, and pianist, Jose Ramon Echezarreta.  She formerly taught in the Music Preparatory Division at Texas Christian University, as well as having numerous private students.

​A career highlight was performing as Mrs. Sedley in Peter Grimes, under the baton of Maestro Robert Spano, as an Aspen Opera Theater Center Fellow. In 2016, Ms. Peden pursued her dream of singing dramatic repertoire abroad as Ulrica in Un Ballo in Maschera with IOS International Opera Studio in Gijón, Spain, followed by a move to Germany. In the last three years, she has sung in the Opera Choruses of Theater Bonn and Theater Osnabrueck, participating in the 2018 CPO recording of Hans Gal's Das Lied der Nacht, and performing in the Netherlands and Switzerland. In April 2019, she performed Fricka in Die Walkuere with Berlin Wagner Gruppe. Since May 2019 Peden has been engaged in the Opernchor of Theater Freiburg. 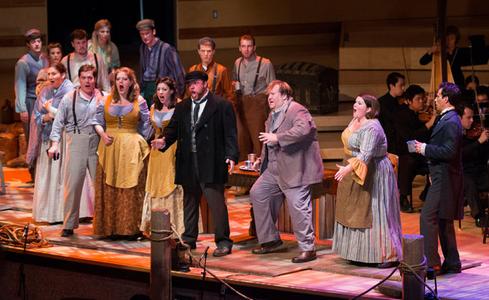